Translation of an article by Heidi Becker
published in the Costa Blanca Nachrichten on 8 May 2015. 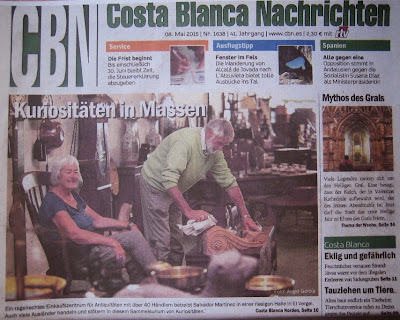 A veritable antiques shopping mall brings together a large number of exhibitors and all orchestrated by Salvador Martinez in an enormous warehouse in El Vergel, Alicante. Many foreigners and locals can visit and rummage in this hodgepodge of treasures and curiosities.
By Heidi Becker
Costa Blanca Nachrichten
Photos by Angel Garcia 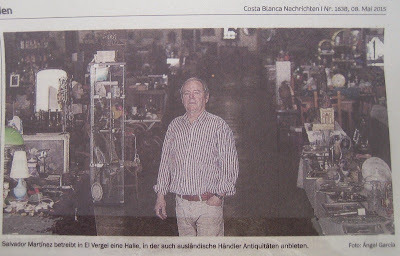 Wandering through the streets of El Vergel I somehow end up infront of a large building. Could this be an antiques shop? In the entrance to the huge hall flags from Brazil, Spain and the USA gently flutter in the breeze. And on the terrace in front of the building there are bits of furniture that frankly deserve to be called antiques. There is no signpost or banner to indicate the new antique shop run by Salvador Martinez. I enter the building and am flabbergasted.

For over 50 years, Salvador Martinez has been in business. At age seven, he began restoring old furniture with his father. His father collected early coins and restored arms and weapons. The family enthusiasm for antiques and old things all began with Grandpa Pedro who ran a watchmaking shop and repaired sewing machines.

As I stroll along the long corridors, I am amazed at the variety of antiques. Situated at the entrance is a huge Jesus figurine looking down on me and a few meters further on I am impressed by a massive chinese vase. This diversity is no accident. In the huge hall a large number of international depositors trade out of individual stalls.

A large collection of exhibitors in one venue

"It can be compared to an antiques centre or a permanent indoor market," says CEO, Salvador  Martinez. "Many small traders would not survive the crisis and so it is better for everyone if they are offered space together in a large hall full of antiques". In Barcelona alone, the crisis has driven about 500 antique shops out of business.

One of the dealers of small objects shows me his treasures and surprises me with a smattering of German. There are traders from Spain, Germany, Holland, Austria and England. "Many of our depositors are not Spanish, but have lived here for a long time," says Martinez. "In the same way, our customers also come from a variety of different countries. Most of them from Germany and England who tend to be more interested in antiques than the Spanish consumer." The modest interest by locals also explains the relatively competitive and reasonably priced antiques in the Valencian region, adds Martinez.

Astonished, I see old vessels in wickers, where wine was once transported and several pieces of vintage furniture. "Furniture from the Franco era is very popular with the Americans. Unfortunately, it is quite complicated to ship the items to the United States. This can take months." Martinez mischievously explains that he has noticed that pieces are shipped first to France and from there, on to the United States. The legal situation in Spain is complicated with regards to sending antiquities outside the EU - but this astute Spaniard hinted that traders already know how to solve the problem.

I look at some dressers and breathe in astonishment. Behind me I hear Martinez laugh. He explains to me that there are many newcomers to the profession. Two dressers. Both beautiful. One costs 175 euros, while the other 4,500 euros. The two dressers come from two different centuries, which explains the price difference. However, Martinez suggests, most of his customers make impulse purchases based on the more reasonably priced items.

"Every trader has their own specialty"

I walk past hand-carved figures from the last century and meet the couple Sregers. Anna and Rick Sregers have run an antiques shop in the Netherlands and now continue their hobby on the Costa Blanca. "Before, we were standing on the pavements at flea markets, but then we thought, we would try this." The couple reported that they "find this concept great, because everything is in one place, with many different people and we all specialize in something."


HOW TO GET THERE: Take El Verger/Pego exit on the N332. Follow sign to El Verger. On 1st large roundabout take the LAST exit. It is a small slip road. There is a motorbike/sidecar shop on left (Taller de Moto) as you come on to the slip road. It is about 400 metres up on the left. Sign above shop: SUPER TIENDA, (directly next door to the Tienda Hipica Vergel - The Horse Shop - can find on Google Maps).
Publicado por Antiques Martinez en 18:07