René Burri is one of the world’s great photographers, a member of the Magnum Agency which helped tell the tumultuous story of the 20th century in stark black and white.

Swiss-born Burri, travelled the world with his Leica camera, capturing images of politics, conflict, art and everyday life. His best known or, at least most widely reproduced, photograph shows Ché Guevara with a cigar between his teeth looking serious and beautiful in Havana in 1963.

The very first photograph he ever took in 1946 was when he was just 13 years old. The photograph shows Winston Churchill standing in the back of an open top limousine as it passes through the streets of Zürich on the way to an important post-war conference. 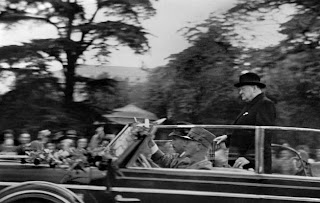 “My father was a cook, a chef and an amateur photographer, he gave me his old Kodak and said that a famous man is coming to town and that is the picture I took.”

The photo of Churchill shows that Burri either has a natural eye or it was a lucky first shot, because Churchill is caught in focus and you can see that the car is moving at some speed because people on the other side of the road are blurred. René Burri really tracked his subject, followed him with the camera. It was just one shot on the roll of negatives. That was Burri’s very first photograph in 1946.

Burri’s most famous photograph is of Ché Guevara. After the Bay of Pigs, Ché and Fidel Castro went to New York to the UN. One of the reporters from Lüft magazine got permission to participate. René was chosen as the photographer. “When I went in it was quite dark. I asked if I could open the window to let in the light, Ché Guevara didn’t seem pleased with that idea.” 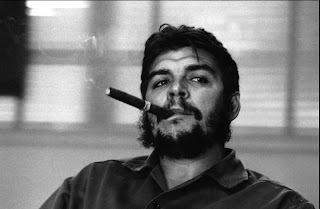 The photo of Ché is a fairly dark and moody shot, with just a whisp of cigar smoke. Burri says: “I danced around him for 3 hours and in not one was he looking directly at the camera. I was 30 and he was 35, he was a good photographer too. It was an amazing situation at that time with Cuba, it was like David and Goliath.”

Picasso was a great hero of Burri’s, “I went looking for him for six years and one day in a small hotel in Nimes, I opened the door of a hotel room and there he was sitting on the bed.” They are very candid photos, very domestic, very relaxed. “Picasso gave me the thumbs up as I walked into the room. I had my cameras, a woman pushed me into a room, everyone is here she said. I pointed at my camera as if to say can I take photos and he gave me the thumbs up. After six years of chasing him around, always trying to find him in Paris and through contacts and there he was, just sitting on the bed in that room. I see that is the way it has to be.” 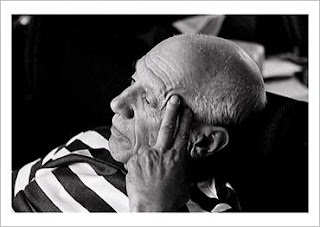 “You can not wait for the luck but you can create it, or when it happens – you have to be fast – either you miss it or you do it.”

Another famous photograph of Rene Burri’s is taken from up high in Sao Paulo, Brazil and it is looking down over a street. There are four men in suits on the top of another building, coming from nowhere going nowhere. It is like a shot from the opening of a heist movie. René never found out what they were doing there or who they were. 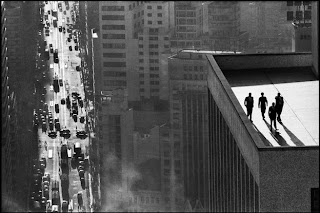 “When I went back to the contacts, people would say: ‘Rene either you think you are a genius or you are stupid’, because I would only take one or two shots, no more. Like a sharpshooter, or a sniper.”

There are some links and suggestion between your photographs – is this true? Like the one from the battlefield with the prosthetic leg lying on the ground and later in the book there is an escalator and a flight of stairs and there is an able-bodied man going up the escalator and a one-legged man going up the flight of stairs. Burri says: “This is the photographer’s natural eye to see these things and these details. It is natural to see that sort of thing being played out. Yes, there are suggestions and links, I cant help it.” 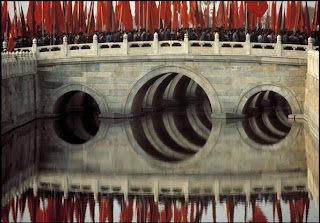 As you take photos is there something you see specifically? “Even when I close my eyes I can see images.” Do you see still images in your dreams? “No, my dreams move. The only thing that counts is the movement as was once said. I want to write a book about the photos I haven’t taken, why and what?” Do you regret not taking them? “I don’t regret not taking them. But I can see them in my mind and I can replay the sequences.”

“For example, I was on a street in New York with my Leica camera in the 1950s all of  a sudden I see a lady coming towards me on the sidewalk – there is no one around - she comes closer – I had my Leica. Oh my God! I saw it was Greta Garbo. She kept coming closer, I began to tremble. She unfolded such an aura. As she passed me, she smiled – but I couldn’t take the picture. That is the moment when I missed becoming a paparazzi.” Did your nerve fail? “No I made a decision not to take that photo. It was an encounter between two people – only that. People said to me: ‘René, you missed a great opportunity, you could have sold it…’. “But I don’t want to take pictures like that.” 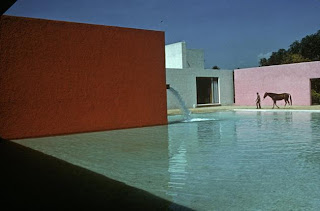 Of all the thousands and thousands of photographs that you have taken, is it possible for you to pick out a favourite? René answers: “I have 5 children – which one should I choose? – each one has different qualities. I say, 'don’t put all your eggs in one basket!'."

"At the end of it, the world has changed, I couldn’t change it, but what I could probably change is that some people through some of my pictures have another perception of what the world is or what it could be. Because I still believe in man. Abit romantically perhaps – but that is the only game we have – and I have seen the worst of it and the best of it.” 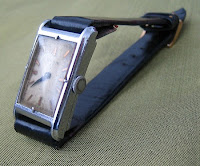 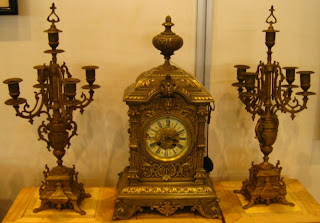 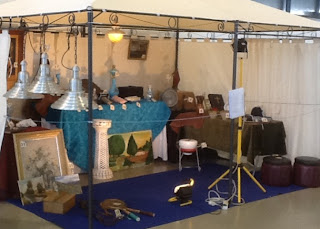 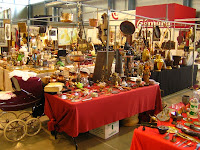 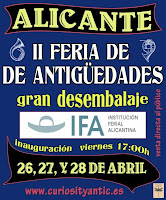 For thousands of years, devices have been used to measure and keep track of time. The current sexagesimal system of time measurement dates to approximately 2000 BC, in Sumer. The Ancient Egyptians divided the day into two 12-hour periods, and used large obelisks to track the movement of the Sun. 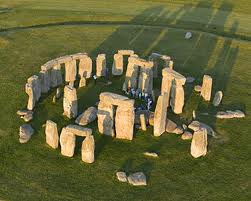 They also developed water clocks, which were probably first used in the Precinct of Amun-Re, and later outside Egypt as well; they were employed frequently by the Ancient Greeks, who called them clepsydrae (literally water thief, and is the Greek word for water clock). 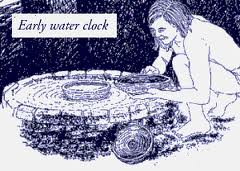 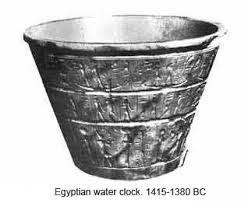 The Shang Dynasty is believed to have used the outflow water clock around the same time, devices which were introduced from Mesopotamia as early as 2000 BC.

Other ancient timekeeping devices include the candle clock, used in China, Japan, England and Iraq; the timestick (sundial), widely used in India and Tibet, as well as some parts of Europe; and the hourglass, which functioned similarly to a water clock.

The earliest clocks relied on shadows cast by the sun, and hence were not useful in cloudy weather or at night and required recalibration as the seasons changed (if the gnomon - the part of the sundial that casts the shadow - was not aligned with the Earth's axis). 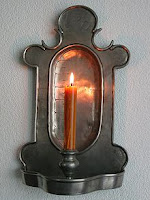 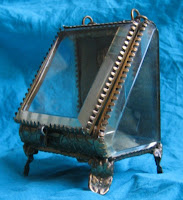 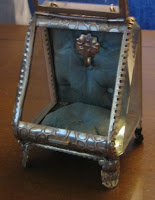 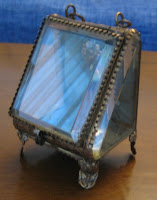 Condition: used with some wear and tear - though no breakages. No parts missing. Small area of green material inside is worn & rubbed with use. Back metal area a little dented. 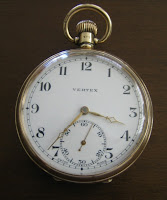 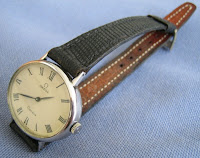 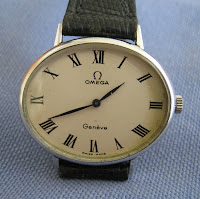 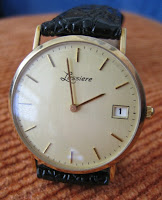 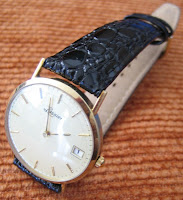 Have a browse of some of our collector's items. Copy and paste the link below. Enjoy! Thank you.
http://www.ebay.co.uk/sch/Arnaly/m.html?_ipg=200&_sop=12&_rdc=1
Publicado por Antiques Martinez en 15:21 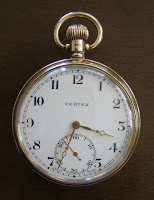 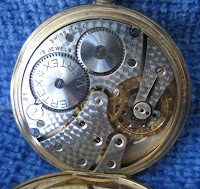 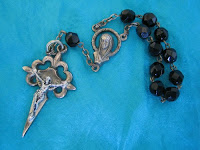 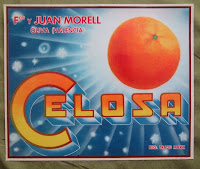 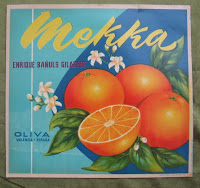